Hide Behind The Silence EP 1 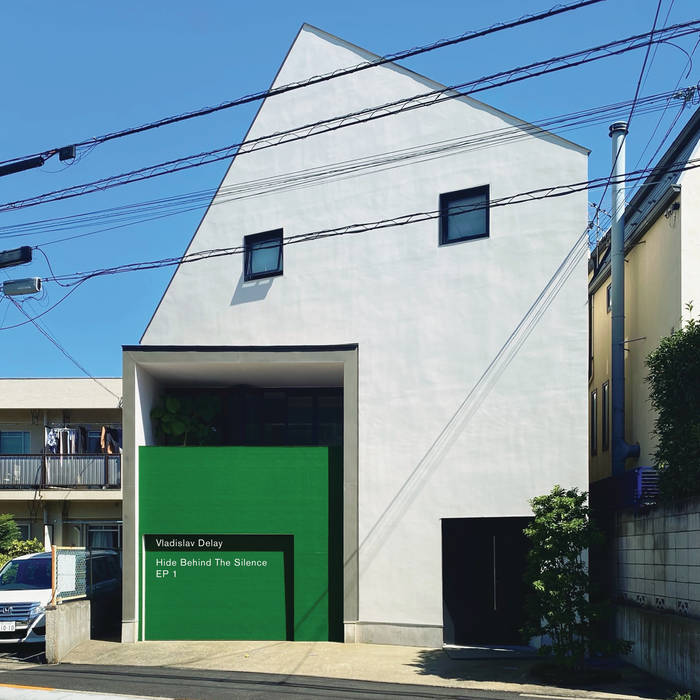 hfisch I can not stress it enough: I bought this without even owning a turntable. Just to support Sasu Ripatti. There are four more of this series this year? Yeah ... all bought! Favorite track: Wallfacer.

Nathan Duin That liminal space where Vladislav Delay enters into something you've not heard before. Don't miss out. Favorite track: Silencio.

Vladislav Delay presents Hide Behind The Silence EP 1 - 5, a series of five 10" releases coming throughout 2023. Intuitive and raw music, momentary and reflective, released on Ripatti's own label "Rajaton".

Stillness is a myth. Consider concepts such as ”still water”, or ”still air” for that matter. Go to a restaurant, ask them for a glass of still water, hold it against the light and see where we’re at. Even though the water itself has been captured and imprisoned in the glass, it never stops breathing. It’s filled with tiny particles, dancing. Everything can be explained on a molecular level, but since we’re not scientists – and even if you happen to be – it’s the natural world of perception that moves me.
Still air is very similar. A hot summer’s day with zero wind feels completely still. It’s the closest I have felt to complete stillness. Or for a more urban adaptation, imagine the same vibe inside a normal apartment. In those moments, revelations and mind- blowing experiences can be had with experiments in stillness.
Try this: Just sit down for a minute on a sunny day, making sure there’s enough natural light. Do absolutely nothing. Try not to breathe for a bit. (If you need a mental anchor, you can play Cage’s 4’33” in your head but nothing else.) Watch the tiny dots of dust dancing :..’ ̈.:; ́ ́*°.,’:,. ̈ ̈ ̈ ̈:,.’
The movement is crazy, but the feeling of stillness comes from witnessing how subtle it is. In (perceived) complete stillness, every act of microscopic mobility seems to speak volumes. Yet, it feels both reassuring and oddly threatening that the stillness is never complete. What if we would need absolute stillness? Or is it just enough that we can perceive something as such?
Extremes attract, so for both water and air, extraordinary movement is equally fascinating. That is also a luxury item of sorts. For us to enjoy a very ”loud” body of water or air, we need to be safe, in enough control of the situation. So when you are, it’s worthwhile to pay attention and take it all in.
A rapid flowing free with extreme strength and just barely in control. Look at that water go! No still water on this one, only ”sparkling”. A windy day when birds seem surprised how hard it is to fly, but in the end they make it. Trees bend but don’t break. The wind shows you its movement but doesn’t hurt you. It feels friendly, like a big clumsy dog that doesn’t quite understand its size.
It’s beautiful to be a guest of the elements, but not at the mercy of them. A new kind of dialogue forms.

*1) Tell us something about the EP series ”Hide Behind the Silence”, what’s the idea and what can we expect?*

Exploration of inaction. Of many kinds. In arts and in personal life, or at bigger and more serious levels. Questioning myself as a human being as well as an artist. Acknowledging the growing activism all around, and the very clear need for it, and how it reflects my own inaction.
Musically speaking, after Rakka, Isoviha and Speed Demon, I finally found some relief, but more importantly lost the need to go musically ever more outward and intensive. I felt quite strongly certain periods/moods from the past and they made me revisit some musical ideas or states of mind I was exploring early on.
It’s about live moments being captured, not much premeditation or editing. More intuitive and raw, even though the end result (to me) feels and sounds quite introspective and calm. It’s not very ambitious. Momentary and reflective.

*2) Your music doesn’t sound very silent. Does it come from somewhere behind the silence?*

Oh, this time to me it sounds quite quiet and playing with space if not silence. I don’t know what’s actually behind silence, but I think silence is the source of everything. We just don’t understand it yet.

*3) What kind of thoughts or experiences gave inspiration to this series?*

Writing this in Nov ’22, it’s not a stretch to say the world has been really unwell. Sometimes, like Mika Vainio put it, the world eats you up. I feel a bit like that. And I try to hide in my studio and stay away from it all, but it’s getting harder by the day. I’ve been questioning myself and thinking if what us artists are doing is worth anything, and whether it’s just a selfish thing I’ve been doing for the past 25 years, running away from everything. I haven’t come to a conclusion yet.

*4) Is it easy for you to be in silence, or around silence?*

Absolutely. I not only hide behind silence but I also love silence. It’s only since I started going back to nature as a grown-up person that I sensed and was enveloped by silence, true silence. I have begun to appreciate it a lot. I think all the people should spend more time in silence.